First, I want to remind all those who are Reiki Masters, which is how to achieve the Violet Breath Technique and will then have some specifications that are important in my opinion, are not currently known. I think what will you communicate in this Article shall complement the harmonious and comprehensive Violet Breath technique, effectively helping all Reiki Masters in the process of initiation /empowerments.
Stages of the Violet Breath are presented below.
"Violet Breath Technique
1. Contracted Hui Yin point (see below), placing the tongue on the palate, the back teeth.
2. On inspiration, imagine a white light that penetrates you down through your crown chakra and through language, then in front of the body, the Hui Yin point and up, up the spine, focusing your head. Hold your breath and take steps, 3 and then 4.
3. View white light, revolving clockwise and turning, becoming finally violet.
4. In violet light, draw the Tibetan Master symbol, golden in color.
5. Breathe easy in the crown of the Student / Receiver and imagine Tibetan Master symbol (for which there are names: Tibetan Dai Ko Myo  or Dumo), entering through your breath and crown Student / Receiver in his head and placing it in the brain. Say the name of the symbol start Dumo three times and attach it to the neck Student / receiver.
Emphasize that in this book, the exposure initiations, I shall use the name of Violet Breath.
I would like to present here, without using additional supporting drawings, human anatomy, practical way how to do contracting Hui Yin point.
Hui Yin point is located approximately halfway perineal area, which is the area between the genitals and anus.
In males, Hui Yin contraction point is obtained by contracting the anal sphincter. Sure, the anal sphincter contraction (which is a muscle and may tire) should not be done in an exaggerated way, but easy enough as tightening loose anal sphincter muscles to achieve energy channels is obtained, which forms Master Instructor and is needed in the initiation.
In the female, Hui Yin contraction point is obtained by contracting the anal sphincter muscles and tightening the vagina (this is the point of view of American Reiki Master Diane Stein). From discussions with other Reiki Master, it follows that simply tightening the anal sphincter, vagina leads to muscle contraction. Muscular tension of the two should not be done in an exaggerated way, but easy enough as it is a slight tightening of the muscles, to achieve energy channels is obtained, which forms Master Instructor needed in the initiation.
Try this way of working for Hui Yin contraction point and you will notice that there are NOT  problems with achieving of contraction, or to maintain contraction for all the duration of initiation, the new mechanism can be taught new Master Instructor – Male or Female, very quickly. You only have experienced the above steps.
Because it is a very important requirement for execution initiation, again underline that point to keep contracted the Hui Yin Point and the language down the mouth behind the teeth, for the duration of initiation (from its beginning until the end) for all students, who make the start. "
We introduced this technique in my book "Karuna Ki Reiki - Healing and Spiritual Evolution" Ed Lucman, 2010, and submit to all courses I teach Reiki to Master level, so the degree to which learning by future Masters Technique initiations.
This technique, in my opinion, was introduced by William Lee Rand in initiations made on developed systems by him: Karuna TM Reiki and Usui / Tibetan Reiki.
Violet Breath technique uses knowledge of traditional Chinese medicine (acupuncture used in Taoism) in the sense circuits use energy and major energy points of traditional Chinese medicine.
I would like to make some considerations about the energy channels that underlie this technique in order to reach conclusions eyes all steps ritual "Violet Breath".
In Figures 1 and 2 are extraordinary meridians of acupuncture, which are used in ritual Violet Breath - Fig. 1 and Figure 2 is presented the performance of breathing, which involves the Master Instructor who is initiated, except contraction Hui Yin point and placing the tongue behind the teeth. 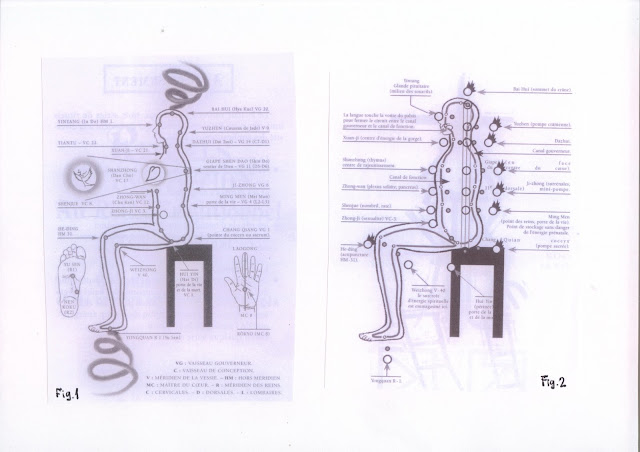 Figures 1 and 2 are taken from the Joel Vichery book: Reiki - Rituels et Symboles, Tous les Degrees, Technique d'Initiation du Reiki Tibetain, TrajectoirE Edition, 2000.
The book is translated into Romanian in 2012, by Publishing House- Nicol, , under the name Joel Vichery: REIKI - Rituals and symbols, all degrees, Tibetan Reiki initiation techniques.
I clarify, for those interested, that in book the initiations are not for Tibetan Reiki but  for Usui / Tibetan Reiki, system developed by William Lee Rand.
Recommend, for those reading this article, use for more rigorous follow my explanations, watching Joel's Reiki Handbook Vichery, be it in French Language, or Romanian Language to possibly have figures images presented more clear. Of course, you have to locate two original designs - the book in Romanian Language at pages 161 & 160, and the book in French on pages 191 & 190. Please do so from less good quality of the two figures above.
The reason for this way of working, starting from the set of all Master Instructors Usui Reiki Usui / Tibetan Reiki, Usui Shiki Ryoho Reiki, Karuna Reiki TM, Karuna Ki Reiki, for example, is as close as energy flow between the vessel and Governor vessel design - by contracting Hui Yin point, and by placing the tongue behind the teeth and palate are stuck back in the head block of universal energy Master Instructor / Reiki, which blow for Student / receiver (energy formed a white cloud the head instructor and then by drawing the symbol Dai Ko Myo Tibetan (DKMT or as he says: Dumo) in the center of this white cloud and rotating clockwise behind the student / instructor intended receiver is transformed by the Violet.
Analysing some textbooks of Acupuncture, who are given on mini - bibliography, I found several things that led me to having a different point from the Violet Breath, as has been described above, and who finally persuaded me to achieve a different kind of breath of Initiation applied to the crown chakra student, Violet Breath differently.
Everything I present here has been applied by me in Usui Reiki initiations for grades 1,2,3 and 4, with good results, meaning that those who had received such parameters of Reiki initiations (see my article on this blog: Radiesthesyc Parameters for degrees / levels of  Reiki systems) of value at least equal to those obtained by using Violet Breath.

The first observation that I have to do, on refer to the obligation to mentain contracted Hui Yin – Point, in conformity of  method Violet Breath. Motivation to maintain Hui Yin Point in the contracted state, presented in detailed manuals on Reiki initiations, is that in this way joins Governor vessel with Conception vessel, thus only being able to bring the energy that was converted into Violte Light which is algorithmed by the Dumo Symbol ( or DKMT), which is not true because the Hui Yin point which is the first acupuncture point (at the bottom) of the Conception Vessel named - point REN-1 - is in permanent contact  with the first point (lowest) of Governor Vessel named Chang Qiang - DU-1 point. We kept the traditional notation of Acupuncture, in Figures 1 and 2 which are taken from the book of Joel Vichery: REIKI - Rituels et Symboles, Tous les Degrees, Technique d'Initiation Reiki go Tibetain, TrajectoirE Edition, 2000, names of acupuncture points is in French, are abbreviated to VC 1 (French Lg.) instead of REN-1 (consecrated in acupuncture textbooks, in English Lg.) and VG 1 (French Lg.) instead of DU-1 (consecrated in acupuncture textbooks, in English Lg.).
Following the achievement of energy needed to bring to be blown the crown student to open main energy channel (which is identical to the vessel Governor) of the head Master Instructor, is not strictly necessary that Hui Yin point to be contracted, and also not necessary - obligatorily - the energy of the head instructor, white cloud, to be converted into Violet Energy.
However, it is advisable, in my opinion, the energy to be transformed - by the intention of the instructor - in Violet color - because it is better for main energy channel opening.
The ritual blast of energy - I called Breath Dumo -  and Hui Yin point is non-contracting.
The second observation we made is that language instructor position behind the teeth (the palate) do not realize a purple targeting energy through breath made on your crown Student Instructor, by blocking the possibility that energy to return to the head Master Instructor , by placing the tongue behind the teeth, the palate, there is no blockage, the purpose of this job is merely to accelerated flow of energy / Reiki.
Following breath (breath) Violet can be simplified and therefore can be much easier to become a decisive help people who have problems with anal sphincter muscles, vaginal muscles, etc., in this way, when receiving the degree initiation 4 - Master Instructor, can make the turn initiation without breathing problems raised by Violet Breath.
In conclusion: In achieving breath called me breathing (bellows) DUMO energy that is all purple, Hui Yin point is non-contracting (situation that brings greater convenience in performing the rite of initiation), and tongue placed behind the teeth, the palate throughout the initiation, it is not necessary to keep the language behind the teeth than the breath Dumo than as detailed below:

"Dumo Breath Technique
1. On inspiration, imagine a white light that will penetrate through the crown chakra focusing your head. Hold your breath and perform the following steps.
2. Place the tongue behind the teeth (the palate, it stuck in the back teeth)
3. View white light, revolving clockwise and turning, and finally becoming violet.
4. In Violet Light, draw the symbol Dumo (DKMT).
5. Breathe easy in the crown Student / receiver and imagine Dumo symbol (for which there is Dai Ko Myo names Dumo or Tibetan), entering through your crown chakra blast student in his head and placing it in the brain. Say the name of the symbol start Dumo three times and attach it to the student's neck.
6. After you complete to the student Brath Dumo you take behind the teeth and tongue to bring it into normal position”
Breathing is done so for any student / receiver during initiation.

I want to point out that if you do initiations with Hui Yin point non-contracting, then after realizing drawing symbols on your hands and activate student / Rceptorului, the Divine Breath (breath continuously towards hands, solar plexus, in the third eye, in the crown, in down to the solar plexus, solar plexus, and finally hands) is made by placing the tongue on the palate, it stuck in the back teeth. After you complete a Student / receiver divine breath, you can get behind the teeth and tongue to bring it into normal position.
When you use this new blow(breath), if you did far more initiations Violet Breath technique untill now, because has become automatic for this technique, for new Dumo Breath you will have greater focus, initially,  to not contract to Hui Yin point. Be quiet because you get used to this more convenient to do initiations.
Also, even after this new type of breathing, you will be told by other Reiki Masters: "It is true that you used Dumo breath, because even if you have not contracted the Hui Yin point, your Spirit Guides have helped and Breathing did it all with Hui Yin contracted " is not true, because your Spiritual Guides who will guide / help / corrects all time of initiation will not violate your free will, therefore if you decide you do not keep contracted Hui Yin point and you do breathing Dumo, it will be as you have decided you!

I wish you all good health and all the best.
Publicat de Eugen Viorel Cretu la 22:37